The graph server is a powerful tool for visualizing the results of our performance tests over time. However, it has a few major problems that make using it in it’s current form difficult. It also lacks a few features that would make it far more useful for tasks such as regression-finding. I and a few other people are looking into improving the graph server. Before starting though, we need to know how you use the graph server, and your ideas for how the interface could be improved, so please let me know your thoughts in the comments! 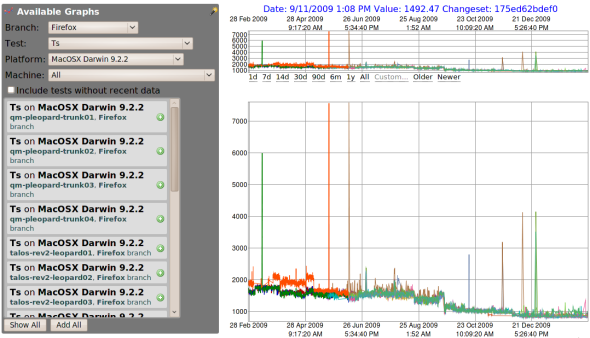 Instead of copying around the table of high-priority startup projects, it’s now centrally located and updated on the Startup wiki page. A couple of front-end optimizations landed this week:

I’ll be in Mountain View all next week for the Firefox work-week.

Taras blogged about the function ordering work he did while on vacation in Fiji (?!). Looks like the potential for a minimum 10% win there, very exciting. Follow along in bug 531406.

Other than that, no major updates:

Nothing major to report. Some of the big projects are in the final stretch, which is great to see.

Related work I did this week: